This year's River Retreat deserves a special place in the history of our SRV Associations.  I am writing this from the standpoint of being the children's teacher for the last 10 years.  There have been children passing through our program since 2001 and choosing not to continue once their teens set in.  But over the last 5 years we have had more consistency with a few of our kids and some youngsters who have started out in their teen years.  What was unique in this year's retreat was an obvious "graduation" from children's classes held in the teaching tent across the stream, to adult classes with Babaji, and the introduction of a special afternoon class for teen and young adults, called Chela Dharma, the path or duty of the student, in which the students studied Swami Vivekananda's teachings on Karma Yoga.

It gave me a special feeling to watch Marleigh and Allegra settle solidly into the adult retreat, complete with 5:00am meditations.  Allegra became the recorder of Babaji's progress through his class outline of teachings for the adult classes [see RR Notes and Reflection 1].  At the end of the retreat, Marleigh helped me take down the children's teaching tent.   Simply crossing the bridge ("to the farther shore beyond all darkness") and seeing the site of her introductory classes in Vedanta and art/science projects, evoked a feeling of nostalgia for a phase well-completed. 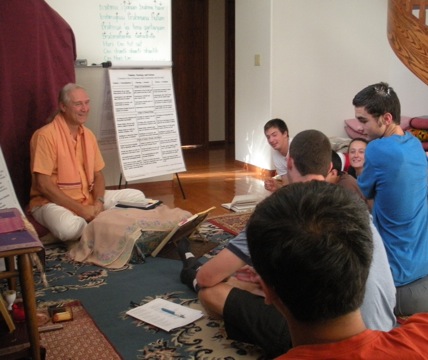 Afternoons at our American River Retreat are generally spent in swimming, jumping, and exploring, but one day, Babaji kept everyone in order to provide an extra two-hour class.  That was the day he presented a chart on the contrasting views of Advaita Vedanta, Science, and fundamentalist Theology regarding the origin of Consciousness, the origin of human beings, and the origin of nature, worlds, and objects.  Afterwards, the youth descended on him en masse and kept him another hour and a half answering more questions. According to Babaji, this just proves that many of young people of the day intrinsically know that something is terribly wrong with the way we are expected to lead our lives in today's materialistic society.  Revelatory Truth, so well-articulated in Vedanta, cannot be ignored.

Chela Dharma - The Path of the Student
The Chela Dharma class was also referred to as the afternoon Svadhyaya class, linking it to the Niyama of Yoga that advocates study of revealed scripture and its recitation.  It was led by Mahesh (Manojaya), one of Babaji's initiated students.  Each class was based upon a section of Swami Vivekananda's Karma Yoga.  Selections emphasized character, responsibility, and karma (as in actions and their effect on character).  Building character is the duty of young people, and as they approach the challenges of SAT tests, college applications, career options, relationships and jobs, Swamiji's teachings are galvanizing.

At the first class the point was made about the unique opportunity these SRV retreats afford for the transmission of Truth from one generation to the next.  Truth does not need to be recreated.  It is eternal, and this is what the Seers have realized.  Each generation must realize the timeless truth of Vedanta in their own time and circumstances and then transmit it to the next generation, as Babaji is doing for us. The transmission of Vedanta from one generation to the next, with the younger generation full of respect and reverence for this process is just what is needed in our current culture.

A few of the other key points and SRV teachings:
The idea of being equanimous: Success and failure come to everyone. One should not allow the magnitude of one's feelings be lopsided as a result of either.  All happens by God's grace.  Interpret these situations according to the teachings. Always live in the eternal moment and meditate [concentrate] on what is being done in the immediate time frame. This cultivates peace of mind and removes all brooding about the past or future. 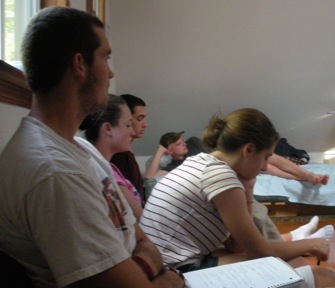 Beware the Bhoga Marg: The Bhoga Marga (path of enjoyment via material objects) is a precarious path to be on. Meditating on objects, which are impermanent, will only bring grief when these things are lost, stolen, decay, or become boring. Rephrasing a popular song, the youth learned their lesson in this regard by stating boldly, "Keep your mind on your Atman, because your Atman is Brahman." Meditating on the Atman allows one to build a solid foundation for life, both spiritually and materially.

Karma: The good and bad effects of trying to "do good." Altruistic stories were used to emphasize the problems inherent in karma, as in damning up a river to create a swimming hole, resulting in lack of water for others downstream. When one goes out to do volunteer work, one's motivation should be to serve God in others while placing the ego under strict supervision and control. This avoids attachment and aversion to results, pride or shame, and sloppiness of effort. One of the students had a traffic violation and was sentenced to 40 hours of community service. The group talked about how this was a perfect opportunity to do work for the Lord, and keep an equanimous state of mind while doing the service. 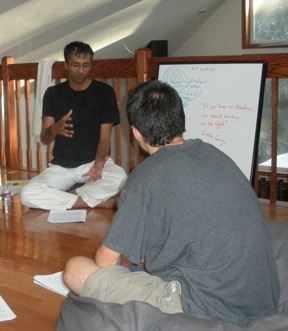 Aparigraha: The group also spoke about gift giving and receiving during the discussion of aparigraha. When one gives someone a present, there should be no conditions laid upon it, and no strings attached to it, or one will become the victim of those very conditions if they are not met. Similarly, one should avoid conditions placed upon gifts given as well. The act of giving or receiving gifts is fraught with karma, and it is best to tread lightly, and to give or receive without any attachment.

Embedding the teachings: The Yamas and Niyamas were taught using a pnemonic device. SAAAB and SSSIT are the acronyms for the Sanskrit terms, and we went over each one of these and how they are found in our lives. (SAAAB = satya, ahimsa, asteya, aparigraha, brahmacharya; SSSIT = saucha, santosha, svadhyaya, Ishvara pranidana, tapas) (Otherwise, if one does not implement the yamas and niyamas, one just sits and sobs.... :)

Getting closer to the fire: Increasing the intensity of our practice will help untie the knots of the mind. This is also felt physically. Sitting next to the meditating guru helps one also to clear the mind (this was recognized by the students when they sat near Babaji during the penultimate morning meditation). One must get closer to the fire so that one's mental impurities become evident; then one can then concentrate on eliminating them. 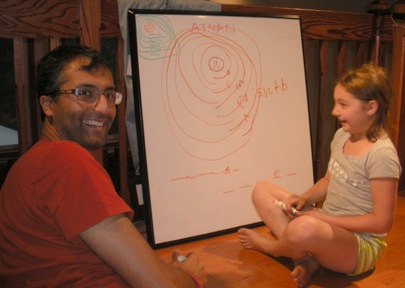 Hangman: During a portion of the class time the group played the popular word game Hangman. However, as Vedantists, we realize that death is an illusion, so it does not make sense to put the poor man out for a hanging if the word is not guessed correctly. Instead, we played At-man. Each player starts off as the Atman, ever free and never bound. Upon each incorrectly guessed letter, the Atman takes on one Kosha. After five Koshas have been placed over the Atman, the player is then "bound in the chains of Maya" and the game is lost. In this manner, a few rounds of guessing the letters in spiritual phrases were engaged in, and the group took in the teachings of the Adhara System as Koshas were added to the Atman. The students seemed to enjoy this word game, and learned the Koshas along the way as well.

To read more about the teen's class:
http://www.advaitaacademy.org/blogs/Annapurna/Vedanta%2c-Teens%2c-and-Young-Adults.ashx

This was a challenging retreat for me, as I was given the chance to mentor the teenagers.  When Babaji told them to memorize the Yamas and Niyamas, I realized that I needed to help them, and as such, I had to memorize the lesson before attempting to assist the others. So this accelerated my assimilation of the teachings quite a bit. This was the general theme throughout the week, as I had to learn each day's Chela Dharma lesson and figure out how it applied in my own life -  and then share that with the teenagers so that the subject matter was shown to be applicable and relatable. For me, it was a reflective process which consumed a chunk of my time on the river. And of course it was a great deal of fun, and it was exciting to see the teenagers’ eyes light up when the teachings were tested empirically and they could relate, with exclamations of "That happened to me too!", etc.

It was great living in a divine mood for almost a week. I agree with Bhava Ma, it would be even better to span the retreat across two weekends.