We met around the big, old, wooden dining table at SRV San Francisco.  On it were spread pieces of blank newsprint on which our four little students drew pictures of what makes them feel peaceful.  There were pictures of trees, ponds, the sun shining, Easter bunnies and more.  Each child had the opportunity to explain their drawing. Afterwards, we met in the shrine room with flowers for a simple worship and meditation. 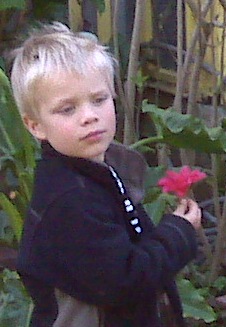 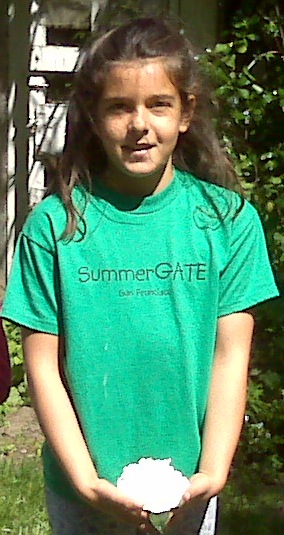 After meditation, the children offered the flowers.  They were curious about some of the divine images on the altar, Ganesha, the elephant-headed god in particular.  The statue on the San Francisco altar shows him with four arms.  One of the children made a funny face, perhaps of discomfort about Ganesha's four arms.

The teacher responded, "Have you ever had both your mom and dad hug you at the same time?  Well, you got hugged by 4 arms!  Didn't that feel great?  Didn't you feel so loved and protected?"  Their smiles of remembrance at this were almost angelic.  Pointing to Mother Durga the teacher said, "Look, sometimes the Divine Mother shows 10 arms -- can you imagine being hugged by Her?  All that love and protection...  Sometimes Mother doesn't show all her hands and she looks like Holy Mother.  Well, when Ganesha was very young, his Mother, who is the Divine Mother, didn't show all Her arms; she just showed two like other mothers.  Ganesha didn't really yet understand what it meant that his mother was the Mother of the Universe, because his mom fed him, and dressed him, and bathed him just like your moms do.  But on a particular day he really got to see what it meant that his mother was the Divine Mother of the Universe."

With this intro, the children heard the story of Ganesha and the cat, addressing the issues of selfishness and insensitivity.  The young Ganesha wanted to play with his cat, but the cat was not in a playful mood.  Ganesha only cared about what he wanted and not about what his pet cat wanted and scratched the cat's face in anger.  We discussed how we treat our siblings and friends.  Ganesha later saw his Mother's face with scratches.  We then talked a lot about what it means to be the Divine Mother -- how the whole universe comes out of Her, how She fills it with Herself.

If the universe goes forever and ever, how can anyone go around it?
Next, the children heard the story of how Divine Mother told Her two sons, Ganesha and Kartikeya, that She would give Her necklace to the one who went around the whole universe first.  Kartikeya, who has a peacock for his "vehicle" jumped right on it and dashed off right away.  Ganesha, who is short and big-bellied, and has a mouse for his "vehicle" already knew the secret, thanks to his pet cat.  He simply stood up and walked around his Mother and bowed down before Her.  She gave him Her necklace.

Hardly had Kartikeya jumped on his peacock, however, when one of the older children raised her hand and asked,  "but how can you go around the universe if it goes on and on?"  The teacher responded, "the universe does go on forever, but it is not the same kind of forever that the Divine Mother is...and the universe comes out of Her.  But the universe doesn't just stop, like this room does with its walls.  It's like when you are dreaming and that universe goes on and on and has no end....but when you wake up, where did it go?  The girl's face just lit up and she said, "Oh, I get it!" This was definitely a highlight moment for the teacher. 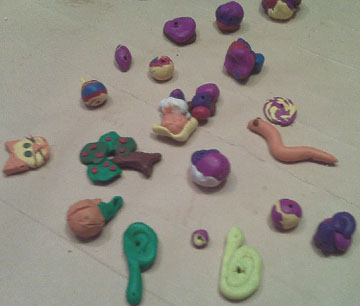 To finish off our time and tie it all together with a fun project, we returned to the big table upstairs and used sculpting clay to make the jewels of the Divine Mother's necklace.  What kind of jewels would be on a necklace belonging to the Mother of the Universe?  The children made planets, animals, stars, suns, trees, shells, and other gems which will be assembled at our next meeting this summer!