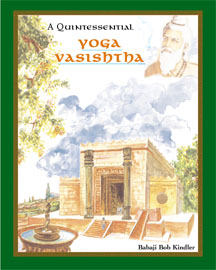 Of all the relationships possible on earth, that rare and timely combination of noble perfection known as guru/shishya, spiritual teacher and sincere disciple, transcends them all.  And scarcely in the sweep of historical time has that most intimate of connections been so well-documented as in the sweet and sacred friendship between Lord Vasishtha - consummate priest, rishi, friend, preceptor, and luminary - and the youthful and as yet unveiled Avatar of the Age, Sri Ramachandra*.  Here, in these pages, ageless seer and exceptional young teenager enact the classic and symbolic dance of the destruction of ignorance from the aspiring human mind.

Yoga Vasishtha, an ancient and beloved scripture, details a lesser known period of Sri Ram's youth not discussed in the traditional Ramayana.  We meet a young Ramachandra struggling to awaken from the veil of maya, to pierce through the shrouded domain of intellectual knowledge.  He has seen the nature of Reality; he recognizes the false perceptions and paltry attractions of conventional life, yet is unable to abide in peace and freedom.  Sobered and stultified, Ramachandra turns to the great sage, Vasishtha, preceptor of his royal father's court, who then plunges him and all present into a spell-binding transmission of stories that continues for days, intent on exorcising the subtle layers of illusion and confusion that inhabit the mind.

In A Quintessential Yoga Vasishtha, Babaji Bob Kindler offers a concentrated and representative selection of these astonishing and esoteric stories, retold in a rich, contemporary style.  The abstruse nature of Vasishtha's teachings are clarified and explored, not only via expanded dialog, but also through detailed charts, or storyboards.  Brace yourself.  Amidst these lucid tales, your consciousness is receiving repeatedly the acidic injections of nondual Truth. The result, if one be seeking such, is a revolution of core perceptions: no longer will the unreal appear as real.

"...I give you this cogent advice; and it should be followed to the letter.  Never contemplate the things of this universe under the assumption of their being real or actual.  Instead, contemplate all as Brahman -- the only Reality." A Quintessential Yoga Vasishtha, page 78

*Sri Ram is the Avatar of the Treta Yuga and prince of the Koshala kingdom who later marries the beautiful and chaste Sita, destroys the evil Ravana, and is served by his faithful brother Lakshmana and the famed monkey-devotee, Hanuman.  To millions of devotees around the world, Ramachandra is the ideal man, king, and fully illumined Incarnation of God.

Read on to see what people are saying about A Quintessential Yoga Vasishtha:

"A Quintessential Yoga Vasishtha is destined to be an important work, and is a welcome addition to the spiritual literature of the Ramakrishna Order.  This profound work gives an illuminating insight into the deeper recesses of the philosophical thought of India."

"While there are many sacred books in the world, there are few truly revelatory ones. Yoga Vasishtha is one of these true revelations.  Yet, like many such works, while its truth is timeless, its voice is timebound, and needs to be spoken afresh that it may transmit its truth powerfully to a new age.  Babaji's A Quintessential Yoga Vasishtha is that fresh voice.  Once again the nondual wisdom of the rishis speak to the world, and does so at a time when we are almost deaf from the screaming of the militant, religious, and secular alike.  Yoga Vasishtha was a gift to the world. Babaji's version allows us moderns to unwrap it."

"With his A Quintessential Yoga Vasishtha, Babaji Bob Kindler accomplishes yet another impressive feat in his life-long project of making the ancient wisdom of India accessible to Western readers.  He manages to retain the poetic depths of his material while subtly instructing the less initiated, not only by providing illustrative storyboards and a Sanskrit glossary, but also by seamlessly interjecting helpful clarifications directly into the text.  As in his previous books, Babaji's decades of uninterrupted dedication to his spiritual journey shines through, illuminating the path for all those who are inclined to follow."